A citizen-driven plan for Binghamton's future

Interface Studio launched the planning process for the City of Binghamton’s Comprehensive Plan Update – BLUEPRINT BINGHAMTON: FORWARD TOGETHER in 2012. The citizen-driven plan will guide the growth and development of the city over the next 10 years and is complemented by a corridor plan that focuses specifically on the design and redevelopment of the city’s main commercial corridor.

Since the last comprehensive plan in 2003, new businesses and housing have brought new life downtown, the population has stabilized, and the waterfront trail and parks have given a boost to the quality of life and regional image of Binghamton. But there’s still a lot to do to keep the City’s infrastructure and neighborhoods in good shape, advance the local economy, and fully realize the potential of Binghamton’s educational assets.

Funded by a competitive grant awarded by the US Department of Housing and Urban Development, the year-long planning process sought to involve everyone with a stake in the city. We kicked off this process with a Pop-Up Gallery where art and urban planning came together in a series of fun and interactive activities. Set up in a vacant former bank building downtown, the Pop-Up Gallery served as a highly visible project base for meetings and special events. The extensive public outreach effort also included an interactive project website to keep citizens up to date and collect their input. The campaign included ideas and input from more than 7,400 residents and stakeholders in Binghamton. 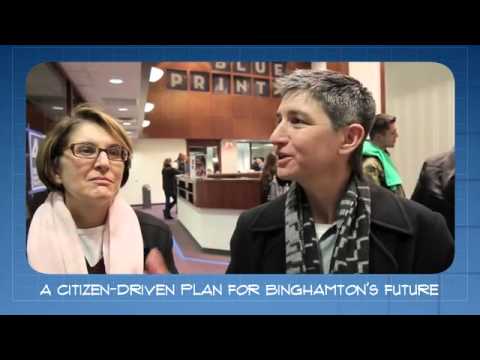 Over 1,000 people, including 300 kids, participated in Pop-Up Gallery events.

Sorry, your browser is out of date
The web browser you are using is too old to view this site. Please update your browser. If your browser is currently in "IE8 compatibility mode" or similar, please disable that. Thank you!